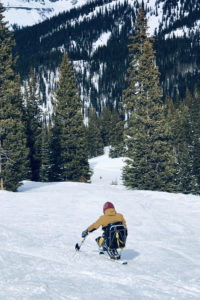 Destined to be Telluride’s first local independent quadriplegic monoskier, Logan Fuller has been ripping up the slopes here at Telluride and Crested Butte. It isn’t surprising as Logan was such an exceptional athlete before his injury as well. He was captain of Dolores High wrestling and football teams. From 8th grade until his junior year, he was a top 8 ranked Colorado wrestler. His junior year, he ran back a 99-yard kickoff return.

Following a rollover accident the summer prior to his senior year, his life completely changed. Instead of training for athletics, he found himself training to feed himself and brush his teeth. Instead of receiving collegiate scholarships, his family received exorbitant medical bills.

The good news is he’s back. He’s attending college online and back to his passion for snowboarding, now in a monoski (sitski). If you wonder how can a quadriplegic ski, Logan has proved the answer is apparently quite well. As he has an incomplete spinal cord injury, in addition to lower body paralysis like most paraplegic monoskiers, he has upper body weakness, but enough left to independently ski in a monoski. He’s been taking many lessons from the Telluride Adaptive Sports Program and attended a camp at the Adaptive Sports Center in Crested Butte. While he’s been off tethers after his first lesson, in order for him to ski fully on his own and more often, he’ll need his own monoski. As a complete monoski setup can run between $6000 to over $10,000, local foundation GoHawkeye is committed to raising funds to get Logan a ski.

Reflecting on his injury and skiing, Logan wrote: “It’s hard to not lose your mind when there’s nothing for you to do but watch time pass by. When I found that I might be able to ride a sit ski, I was immediately set on being able to get back to the mountain I loved. The happiness skiing has provided me and the outlet to freedom is more than I thought was ever possible after being paralyzed. From there on I’ve been determined to be a great monoskier who can rip any part of the mountain.”

On Thursday, March 28th at 7pm, Telluride Distilling’s new tasting room at the Franz Klammer is hosting a fundraiser with a silent auction. Logan has deep ties locally, living in Dolores for over a decade, and he has held a Telluride ski pass since he was 10. His great grandfather moved to the Dolores area over a century ago, and his mother and grandmother were both born in Cortez. He has many close and extended relatives living throughout the area. Telluride, let’s show Logan how we treat locals in need!

There are no reviews yet.