Hawkeye Is a Member of an Elite Club

Since 1980 Hawkeye has walked ? miles 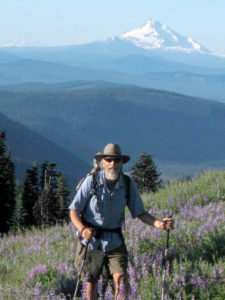 With less than 300 recognized Triple Crown hikers, Hawkeye is surely one of the few who has completed all three of these epic hikes twice.

The Triple Crown Award in recognition of the dedication, commitment, and achievement of those who have completed the three major National Scenic Trails; the Appalachian Trail, the Pacific Crest Trail, and the Continental Divide Trail. ALDHA-West is the only organization that officially recognizes the accomplishment of these few intrepid hikers. At the ALDHA-West Gathering, held each fall, the Triple Crown honorees are recognized and awarded plaques noting their achievement.

Operating on the honor system, ALDHA-West gives equal recognition to thru-hikers and section-hikers and assumes that those who apply for Triple Crown status have hiked the entire length of all three trails. Reasonable alternate routes or required road walks are considered viable substitutes for an official route, assuming one exists. ALDHA-West does not consider issues such as sequence, direction, speed, duration, frequency, or whether one carries a pack. If you have reached this incredible level of hiking, then you too are entitled to be recognized at the next gathering. Read about the  GoHawkeye San Juan Trail below and other trails Hawkeye has hiked from his first-hand accounts at TRAIL JOURNALS.